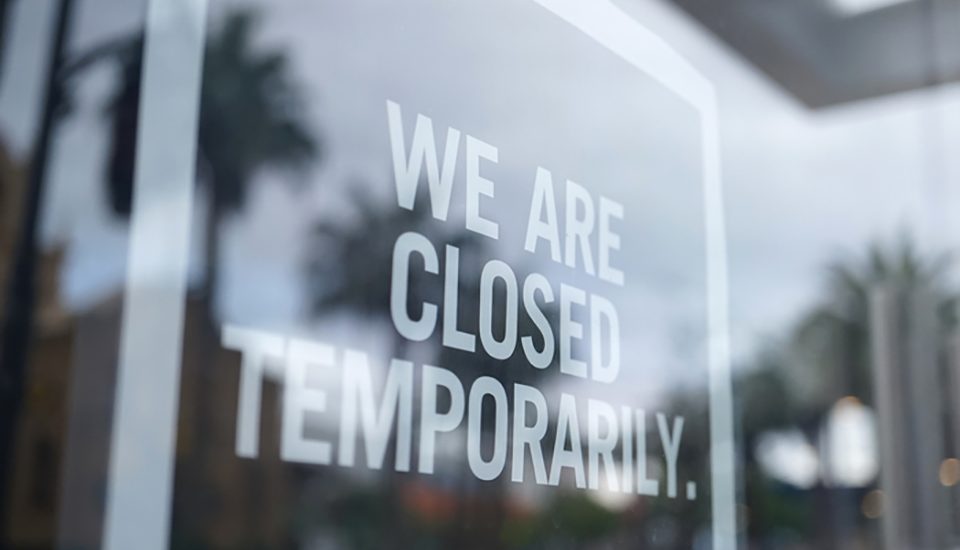 The COVID-19 crisis has led to historically unprecedented increases in the level of initial Unemployment Insurance (UI) claims filed in California since the start of the crisis in mid-March. Through a partnership with the Labor Market Information Division of the California Employment Development Department, CPL is analyzing daily initial UI claims to provide an in-depth and near real-time look at how the COVID-19 crisis is impacting various industries, regions, counties, and types of workers throughout California. This analysis will be updated on a bi-weekly basis.

Click here to view media coverage of this research.

REPORT: May 21st Analysis of Unemployment Insurance Claims in California During the COVID-19 Pandemic

1. Including Pandemic Unemployment Assistance (PUA) claims, one in four Californian workers has filed a UI claim since the start of the crisis, reaching levels of the Great Depression.

2. The added $600 per week from the Federal Pandemic Unemployment Compensation (FPUC) program has played a substantial role in preventing near-poverty income levels among UI claimants.

4. Recall Rate Declines: At 69%, the share of claimants expecting to be recalled to their employer is still substantially higher than an average of 40% before the crisis, but has continued to decline from a peak of 91% at the beginning of the crisis.

5. Pandemic Unemployment Assistance: Twenty percent among all self-employed workers in California have applied for. Relative to workers filing for regular UI benefits, individuals filing PUA are more likely to be White and Asian, are older, and more concentrated in large urban counties.

REPORT: May 7th Analysis of Unemployment Insurance Claims in California During the COVID-19 Pandemic

1. 80% of initial claimants report they expect to be recalled to their prior job, down from 90% at the peak of the crisis, and a substantial increase from 40% who had this expectation before the crisis.

2. All races and ethnicities were affected by the crisis, but the share of Asian claimants experienced an increase in the share of initial claims, particularly among Accommodation and Food Services and Health Care/ Social Assistance Services.

3. The fraction of the labor force that filed initial UI claims since mid-March rose to 18.8% statewide, to 45% for less educated workers, and to 30% for workers in their early 20s.

4. The number of initial claims has declined for three consecutive weeks, but claims in the week ending April 25th were still eight times the pre-crisis average in February. 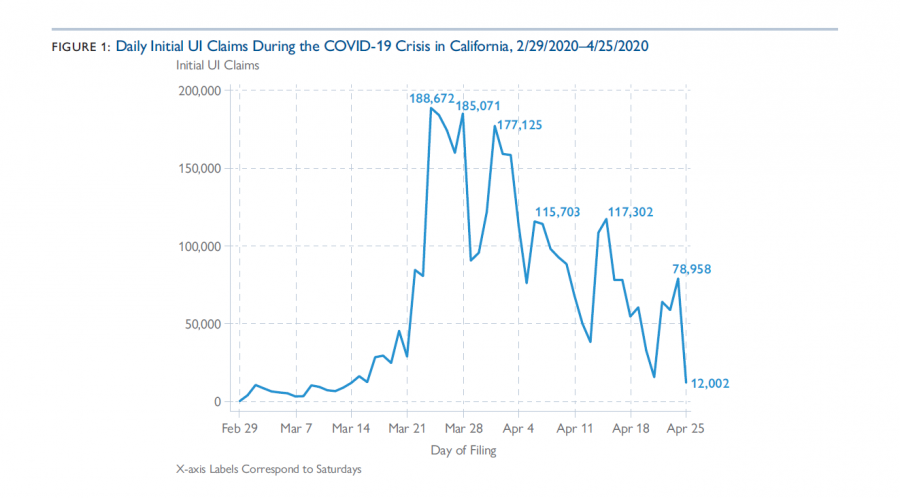 5. While there are important similarities in the effect of the crisis across counties in California, industries in certain counties were more affected than others.

1) Younger workers made up a disproportionately large share of initial Unemployment Insurance claims.
Claimants aged 20–24 made up 14% of total claimants since March 15th, despite only representing 9% of the state’s labor force in February, while initial claimants aged 25–34 made up 29% of the total during that period despite representing only 25% of the workforce in February. 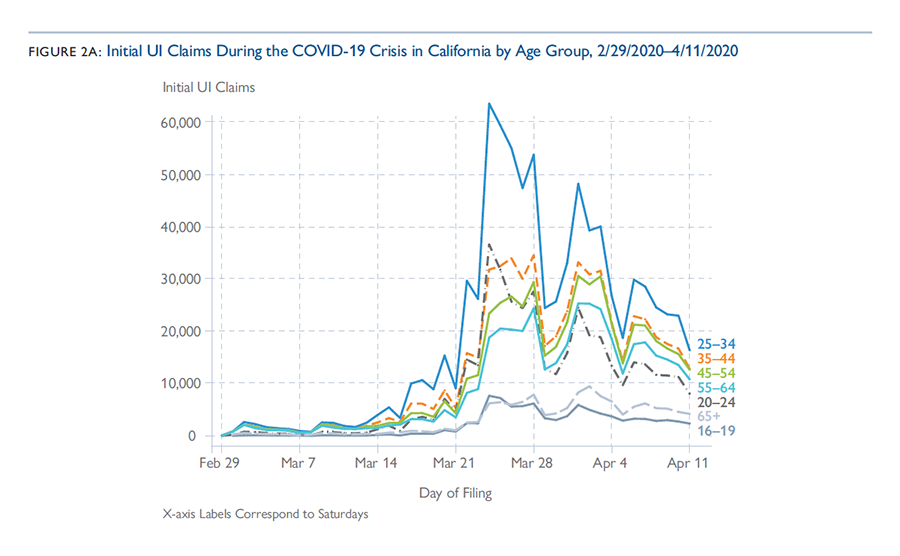 2) Lower-educated workers made up a disproportionately large share of claims.
Since March 15th, a staggering 36.7% of individuals in the labor force with just a high school degree filed initial UI claims (compared to 11.9% for workers with some college or an Associate’s degree, and 5.7% for those with a Bachelor’s degree). 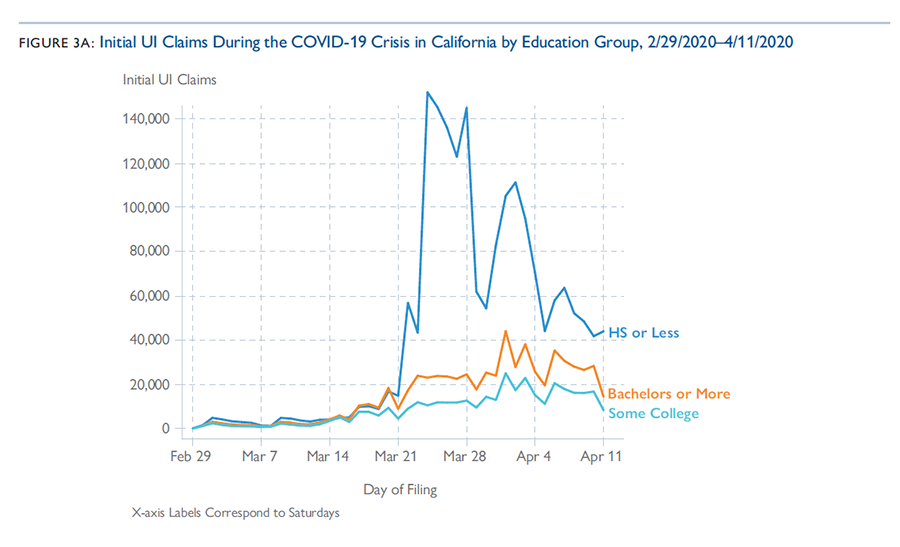 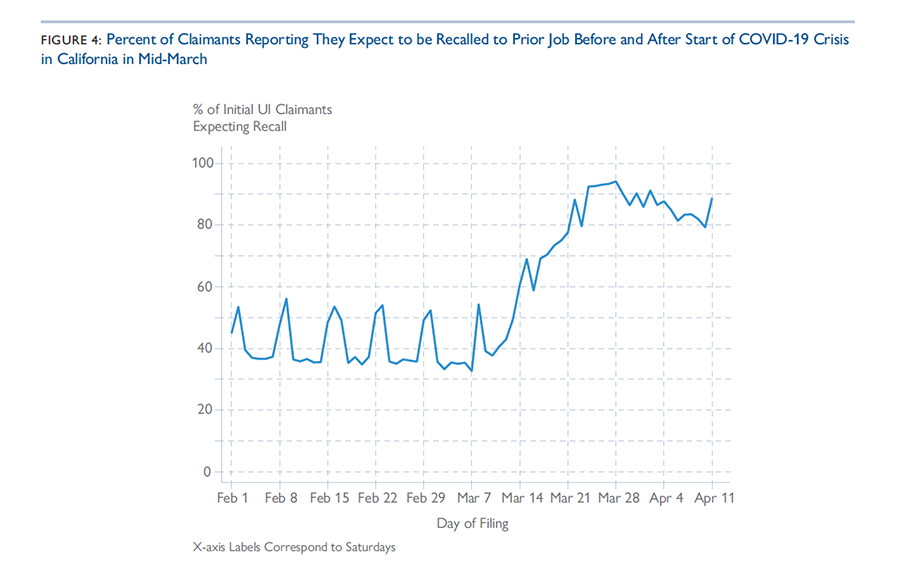 4)  14.4% of the California labor force has filed initial Unemployment Insurance claims since mid-March. This includes nearly 1 in 3 Food and Accommodation workers and 1 in 5 workers in Retail.While both the Accommodation and Food Services industry and the Retail Trade industry each account for about 11% of the state’s labor force, they respectively accounted for over 21% and close to 14% of initial UI claims since mid-March. 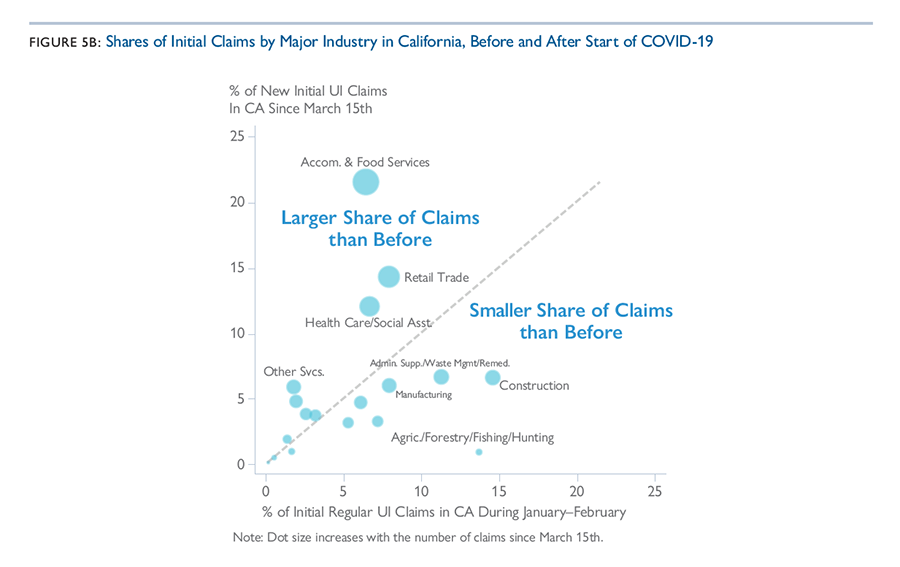 5) All counties have seen substantial growth in initial UI claims, but the rise has been more pronounced in several usually economically strong areas of the state, including the Bay Area, LA, and Southern California. In Los Angeles County, 16.1% of the labor force filed initial UI claims since the start of the COVID-19 crisis, while in Fresno, 12% of individuals in the labor force filed initial claims during the same period.

Business Insider: Coronavirus layoffs have not been equal. Here are the workers that have been hit hardest by pandemic job losses (May 30, 2020)

Capital Public Radio: ‘Like Nothing Before Seen’: California Lost Record 2.3 Million Jobs In April As Unemployment Rate Spiked To 15.5% (May 22, 2020)

Sacramento Bee: These groups have been hit especially hard by California’s unemployment surge (May 26, 2020)

Sacramento Bee: Will laid-off California workers get their old jobs back? Most think they will (May 21, 2020)

KPCC/LAist: Study Estimates 1 In 5 Californians Have Applied For Unemployment (April 30, 2020)

CalMatters: Which Californians are filing for unemployment insurance? (May 1, 2020)

Sacramento News and Review: After the COVID-19 pandemic, will the economy be better for workers? (April 29, 2020)