March 18th, 2021 Analysis of Unemployment Insurance Claims in California During the COVID-19 Pandemic

1. As of mid-February, about half of all UI recipients have claimed 26 weeks of UI benefits or more. Long-term unemployment (LTU), defined here as claiming UI benefits for more than 26 weeks, is known to cause long-lasting scarring effects to workers and the economy. The incidence of LTU is particularly high among Black workers, older workers, women, less-educated workers, and PUA claimants.

2. Female workers, less-educated workers, and millennials have disproportionately benefited from the December extensions of the PUA and PEUC programs. Over half of all workers receiving benefits under the PEUC and FED-ED extension programs reported having no more than a high school degree, despite making up just 33% of the labor force. 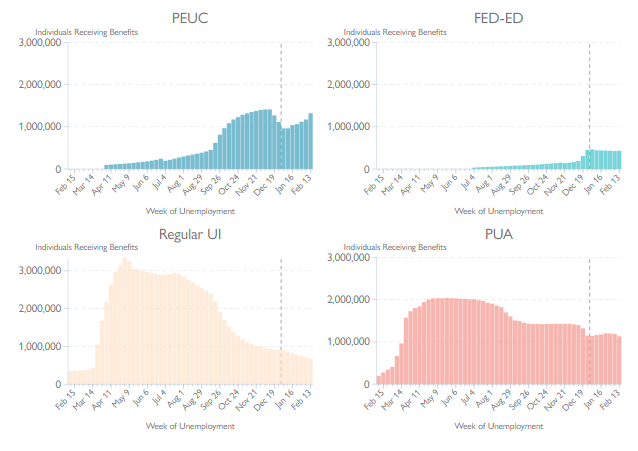 4. Since the start of the crisis, over 45% of workers who were in the labor force in February 2020 have claimed UI benefits. 9.2 million unique California claimants have filed for some type of UI benefits in the last year. The fraction of the pre-pandemic labor force having claimed UI benefits is close to 90% among Black workers, 73% among Asian workers with no more than a high-school degree, close to 70% among Generation Z workers, and 50% among female workers.

5. Total Initial Claims declined in February, but were still 50% larger than the peak seen in the Great Recession. Average initial claims were 173,000 in February, which is 40,000 fewer than in January. “Additional Claims” (the re-opening of a claim after a claimant has returned to work) continue to make up the majority (75%) of initial claims. 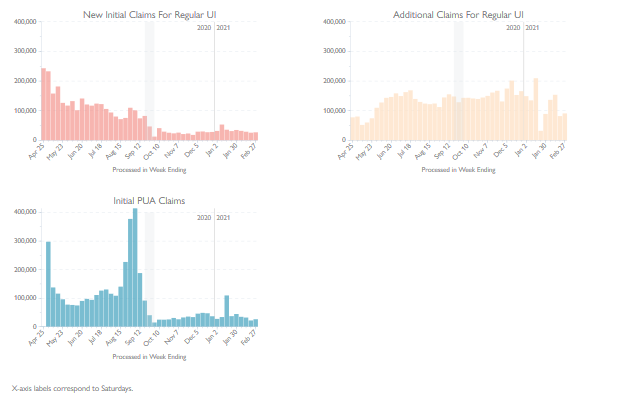