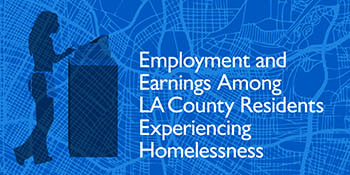 Los Angeles, February 27 — A new report released today by the California Policy Lab at UCLA sheds light on the employment histories of people before, during, and after receiving homelessness services in Los Angeles. By studying enrollment and wages data for more than 130,000 homeless service clients, the authors found that a majority of people (74%) who experienced homelessness in Los Angeles had some work history in California, and that more than one-third (37%) were working in the two years prior to becoming homeless. Only about one in five (19%) were working in the calendar quarter they became homeless, and their annual wages were very low. Their average annual earnings were only $9,970, which is 16% of the Area Median Income for Los Angeles.

“There’s often an assumption that people experiencing homelessness are not working,” explained Till von Wachter, a UCLA economics professor, co-author of the report, and faculty director of the California Policy Lab at UCLA. “While it’s true that some individuals in our study had not worked in a long time, a substantial number – close to half – were working within four years before entering homelessness. These recent workers had a higher likelihood of returning to work after receiving services and their average wages were also higher. The results from our study on who is most likely to work after enrolling for homeless services can be used to tailor workforce programs to encourage employment and raise earnings of homeless service clients.”

3) Most individuals work in just a few industries: 65% of people who were employed worked in one of four industries prior to enrolling to receive services, and those that found employment after enrollment were typically concentrated in those industries. This has implications for job training and placement programs that are intended to support people either to prevent homelessness or to help people as they transition out of homelessness.

• 86% of adults in families were employed at some point prior to service enrollment as compared to 75% for single adults, and 61% for transition aged youth aged 18-24.
• 47% of people were working in the four years prior to becoming homeless, and 37% were employed within two years of their homeless spell. On average, people had worked in two of the four quarters before service enrollment.
• There are 12 categories of homelessness support services. People enrolled in homelessness prevention and rapid re-housing projects had the highest rates of employment in the two years before enrollment, at 67% and 56%, respectively.
• 72% of people who reported mental health issues at enrollment had worked previously, 76% reporting substance abuse concerns had worked previously, and 72% reporting physical disabilities had worked previously.
• In the year before enrolling for services, 24% of individuals who reported substance abuse concerns had worked in the year prior to enrolling along with 20% who reported mental health issues and 17% who reported physical disabilities. This compares to an overall sample average of 29% of individuals who were employed in the year prior to enrollment.
• Individuals coming from stable housing prior to enrolling in services had higher quarterly employment rates and experienced more of an employment recovery after enrolling for services as compared to people who had been homeless for three months or more at the time of service enrollment.
• Recent workers (defined as having worked three or four years before service enrollment) had higher quarterly earnings in the quarter of service enrollment (22% more than the full sample) and had higher annual earnings in the second year after service enrollment ($13,311 for the full sample versus $15,880 for recent workers).

Methodology
The research team linked enrollment data from the Los Angeles Homeless Services Authority (LAHSA) from the time period of 2010 to 2018 for individuals aged 18 to 70 at the time of enrollment to state employment records from the California Employment Development Department for the time period from 1995 to 2018. The analysis was then performed on de-identified data. The full sample size was 136,726 individuals. For more details, read the report, or the accompanying technical appendix.

Additional background and future research
While this report provides a baseline understanding of employment rates among people receiving homeless services in Los Angeles, the authors caution that more research is needed to develop specific policy recommendations. Future research should look at whether job loss is the direct cause of homelessness and for whom, and how workforce and training programs could either prevent homelessness or speed up exits from homelessness. This report did not include data on income supports from programs like Supplemental Security Income, General Relief, CalWORKs, or CalFRESH that would help to better understand the income situation of homeless service clients.