New Report: 2.2 Million Low-Income Californians Could Miss Out on $5.7 Billion in Stimulus Payments 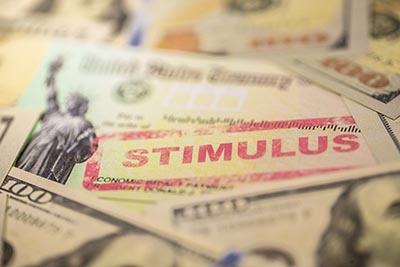 Berkeley, CA, April 6th, 2021 — New research released today by the nonpartisan California Policy Lab projects that one in four (25%) low-income Californians who are enrolled in safety net programs are in the federal “Stimulus Gap.” These Californians likely did not receive their federal stimulus payments automatically and are therefore at risk of not receiving their payments at all. For the average adult, that could mean missing out on $3,200 in total stimulus payments, while adults with dependents under the age of 17 could miss out on an additional $2,500 per child.

The IRS used tax data to determine who should receive the three recent stimulus payments, which helped get payments to the majority of eligible people quickly and automatically. However, for people who don’t have to file taxes (because their incomes are below the required threshold), they would not have received their payments automatically so would have missed out on them unless they either filed taxes (something they don’t usually have to do), or used the IRS Non-Filers Tool between April and November 2020, when the tool was removed from the IRS website. The research team calculated the number of Californians who are in the Stimulus Gap by comparing enrollment data for safety net programs in California (like Food Stamps) to linked state tax filing data.

“While using tax data to automate payments was an effective way to get money out to most people fast, our research found this strategy unfortunately overlooks a significant share of Californians who need this money the most,” explains report author Aparna Ramesh, a Senior Research Manager at the California Policy Lab at UC Berkeley. “The stakes are high with billions of federal dollars not reaching low-income people in California and across the country. The IRS reposting its online Non-Filers Tool immediately would be a good first step, and partnering with state human-services agencies would also help get these stimulus payments out quickly to people caught in the Stimulus Gap.”

• Two-thirds of adults in the Stimulus Gap (about 880,000 people) are single and without dependents.

• People in rural northern and eastern counties in California are most at risk of being in the Stimulus Gap. For example, 33% of enrollees in the North Coast economic area (Trinity, Humboldt, and Del Norte counties) are at risk. CPL’s interactive map shows the percent of safety-net enrollees in each county that are in the “Stimulus Gap” as well as the overall dollar amount of stimulus payments that may go unclaimed.

• Over one million Californians in the Stimulus Gap may be eligible for other anti-poverty tax credits, such as the Earned Income Tax Credit (EITC) and the expanded Child Tax Credit (CTC).

California Policy Lab Recommendations to eliminate the Stimulus Gap
1. The Non-Filers Tool should be reinstated immediately to simplify the process for people to claim their stimulus payments if they didn’t receive them automatically, with alternative options for Americans with limited internet access to also claim their payments.

2. The IRS should explore updating the Non-Filers Tool so non-filers could also use it to claim valuable anti-poverty tax credits, including the Earned Income Tax Credit and Child Tax Credit.

3. Congress should provide funding to state human-services agencies to conduct targeted outreach to people caught in the Stimulus Gap, which could include text messages, letters, and incorporating claiming the stimulus payments into existing interaction points like recertification interviews.

4. The California Legislature should allow state and county agencies to conduct direct outreach to Californians caught in the Stimulus Gap.

5. Congress should consider directly providing funding to state human-services agencies to eliminate the Stimulus Gap for low-income Americans who don’t file taxes and as a result, are at the highest risk of missing out on valuable anti-poverty stimulus payments and tax credits. The IRS could use a secure portal to allow state human-services agencies to check if their program enrollees had been issued a stimulus payment, and if they were not, could reach out to them directly.

Additional background
The anonymized safety net enrollment data was for individuals enrolled in a number of programs managed by the California Department of Social Services from February 2018 through July 2020, and was linked to anonymized state tax filing data through August 2020. The research team did not include the following people in the Stimulus Gap because they likely received their stimulus automatically: people who had filed a state tax return in 2019; people aged 65 years or older (and likely receiving Social Security benefits); and those enrolled in Supplemental Security Income/State Supplementary Payment, or disability insurance (SSDI). More details on methodology are included in the policy brief and technical appendix.