Introducing the California Credit Dashboard: Insights into the Financial Health of Californians 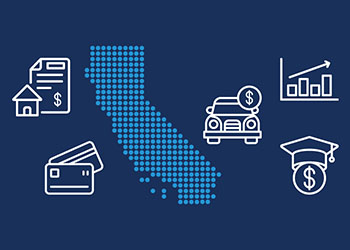 Berkeley, CA, December 21, 2022 — Today, the nonpartisan California Policy Lab launched the California Credit Dashboard, an interactive tool that uses credit-bureau data to provide an in-depth look at the financial health of Californians. The dashboard includes five figures measuring debt in California, and figures can be sorted by loan type, generation of borrower, and economic region in California. The dashboard’s first update, released today, uses credit-bureau data from Q1 2004 through Q3 2022.

“We’re thrilled to launch the California Credit Dashboard and share insights in a way that’s never been done before in California or in any other state,” explains Evan White, the Executive Director of the California Policy Lab’s UC Berkeley site and a co-author of the research featured in the dashboard. “By providing detailed insights at the state level, we can equip policymakers with near real-time information about how Californians are doing financially, information that’s especially relevant given current economic conditions.”

An accompanying Data Point highlights key findings, including a substantial increase in the amount of student-loan debt held by Californians, which has more than doubled from $15,200 in 2004 to $38,500 in 2022.

Key findings from the first update

2. The volume of outstanding car loans has increased consistently since 2011, driven in part by more Californians taking out loans (up 47%) and increases in average loan amounts (up almost $7,000).

3. The average amount of mortgage loans originated in California rose 85% over the last decade, from $206,000 to $382,000 (projected). Car loans also rose by 64% during that same period, while other loan types were mostly level.

4. Delinquency rates for most loan types declined since the Great Recession. Delinquencies, especially for student loans, declined sharply when the pandemic began but are rising again in recent quarters.

5. Since 2011, credit scores have improved for Californians in all regions of the state. However, some regions, like the Central Sierra, saw smaller increases than others, like the Southern Border (23 points vs. 34 points).

More about the California Credit Dashboard
The dashboard includes 5 longitudinal figures for 6 types of credit products (auto, credit card, home equity, mortgage, student, and other) and collections. The figures can be sorted by 7 age groups and by 9 economic regions. The data generally spans from Q1 2004 through present (latest is Q3 2022). A technical appendix provides detailed information about the data and underlying research.