Increasing Stimulus Payment Take-up in California: Results from a Phone and Email Campaign

In Fall 2021, The People Lab (TPL) and the California Policy Lab (CPL) partnered with the California Department of Social Services (CDSS) and Code for America (CfA) to conduct and evaluate a state-wide outreach effort aimed at delivering stimulus payments to low-income Californians. The outreach campaign reached nearly 430,000 households in California. These households were enrolled in either the Supplemental Nutrition Assistance Program (SNAP, or CalFresh) or the Temporary Assistance for Needy Families (TANF, or CalWORKs), and were identified as having at least one likely “non-filer” — someone who had not filed or been claimed on a state tax return in 2018 and/or 2019 and who was therefore likely to miss out on tax-based benefits payments.

In a randomized evaluation, the research team tested the impact of informational outreach delivered via recorded voice message or email on the initiation and submission of returns among likely non-filers through the simplified filling tool created by Code for America: GetCTC.org. The team also evaluated the effect of emphasizing the availability of live assistance, as well as the impact of different message language. 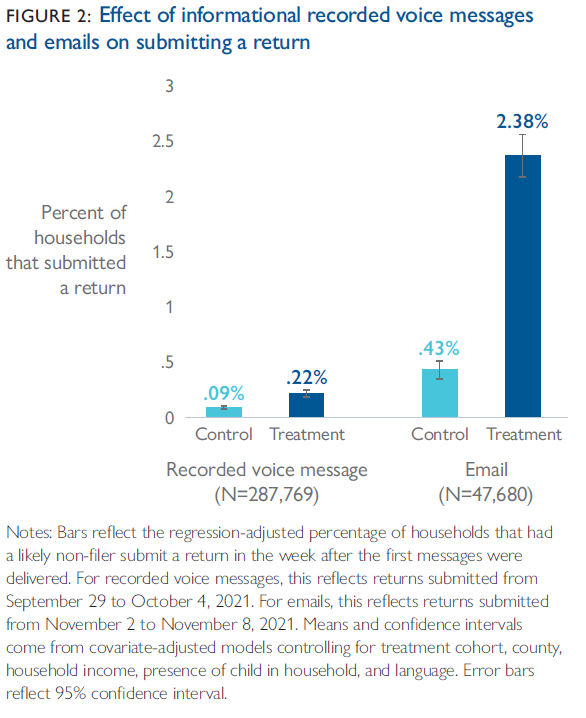 2. In the weeks after the CDSS emails and recorded voice messages went out, recipient households filed 3,575 tax returns, including 7,251 individuals and yielding $13.3 million in estimated refunds (with an average refund amount of $3,761). Yet, some of these returns might have been filed even without the outreach. The researchers estimate that the outreach led to between 631 and 2,864 additional returns that would not have been filed otherwise, yielding between $2.4 million and $10.6 million in total additional refunds. 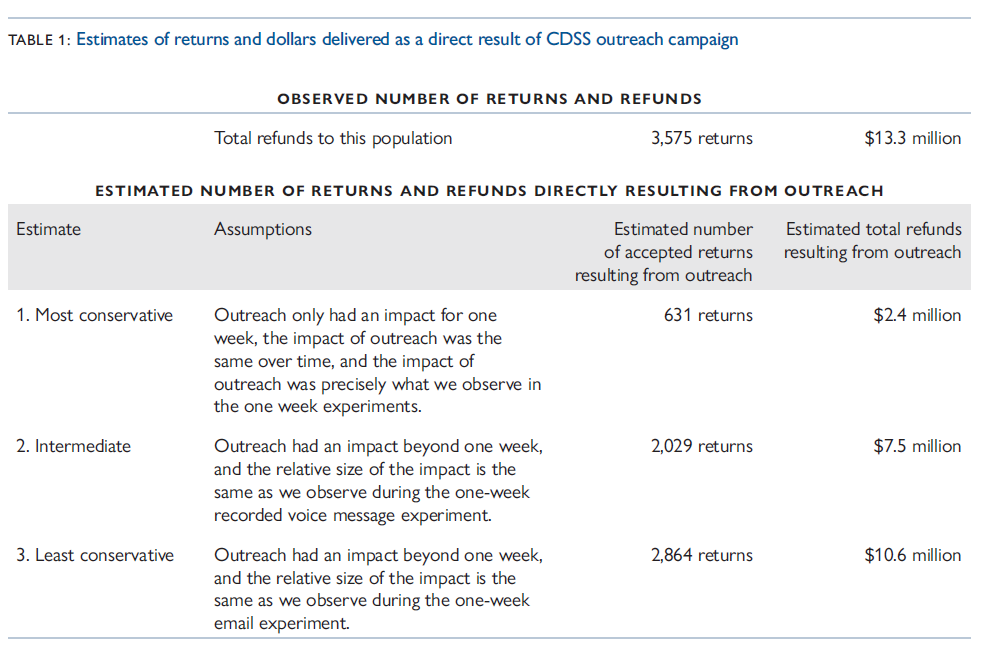 3. Considering the per-unit cost of outreach (not including the fixed cost of the platform or labor costs), every $1 spent on delivering recorded voice messages generated an estimated $52 in additional refunds to CDSS non-filing households. Every $1 spent on delivering emails generated an estimated $10,737 in additional refunds.