Report: Raising Awareness of Tax Credits Isn’t Enough to Increase the Number of Low-Income Californians Who Claim Them 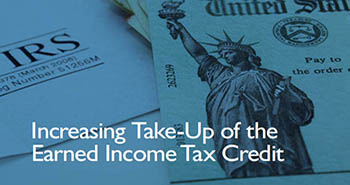 Berkeley, CA, Jan 21, 2020 — The California Policy Lab released a major new study today summarizing a two-year effort to increase the number of eligible Californians who claim the federal and state Earned Income Tax Credits (EITCs), which can provide a significant financial boost to low-income families. In a series of randomized trials, more than 1 million Californians received letters and text messages designed to inform them about available credits. Although some people engaged with EITC online resources shared in the texts and letters, these efforts had no effect on increasing the number of people who filed a tax return or claimed the EITCs, indicating that these additional, targeted outreach strategies were not enough to increase take-up of the EITCs amongst low-income households.

“This research was a valuable way to test strategies for getting more people to claim the federal EITC and the CalEITC,” explained Jesse Rothstein, a co-author of the report, faculty director at the California Policy Lab, and public policy and economics professor at UC Berkeley. “Understanding what is not effective is just as important as understanding what is. We’re now focusing on identifying barriers other than information, and what the most effective ways are to help people overcome them.” The next phase of the research will use the data assembled in these trials to better quantify how large the EITC take-up gap is in California and how much money is being left on the table.

“This study shows simply sharing information about valuable tax credits with low-income Californians who could benefit is not enough to get them to file a tax return,” said State Controller Betty T. Yee, chair of FTB. “The research results will help the Franchise Tax Board and policymakers seek out the most effective ways to ensure CalEITC dollars get back in the pockets of the people who earned them.”

Report recommendations: The researchers made three policy recommendations. First, nudges (like the ones used in the experiment) should not be employed as the sole strategy to get non-filers to claim the credits. Second, government agencies should continue partnering with researchers to use administrative data to identify Californians who are not enrolling in or claiming programs for which they are eligible. Third, government agencies and service providers should explore the feasibility of simplifying the filing and claiming process to encourage more non-filers to claim the EITCs. New strategies should also be rigorously evaluated to determine if they are effective at increasing claiming rates.

About the project and research: In 2017, about 2.8 million Californians claimed nearly $6.4 billion from the federal EITC and $351 million from the CalEITC. Recent expansions to the CalEITC approved by Governor Newsom and the California legislature are expected to roughly double the amount of state credits claimed this year to about $1 billion. These credits can provide a large financial boost to families; but policymakers, advocates, and researchers are concerned that some eligible Californians are missing out on receiving the credits. That’s because people have to file taxes in order to claim the credits, and many people who would likely qualify for the credits don’t currently file taxes because their incomes are below the mandated filing threshold.

To address this take-up gap, researchers from the California Policy Lab at UC Berkeley partnered with the California Franchise Tax Board, the nonprofit Golden State Opportunity, and the California Department of Social Services to see if sending low-cost “nudges” encouraging more than 1 million low-income Californians to take up the EITC would be enough to get them to claim the state or federal credit.

The outreach efforts focused on Californians who were likely eligible for the credits, but who might not claim them. In collaborations with state and nonprofit partners, the research team designed and evaluated a number of outreach strategies, based on existing best practices and also tested new approaches to reaching low-income Californians. This included sending text messages versus letters in the mail, varying who the messenger was, providing the estimated amount of credits the recipient would receive, and sharing information about where to get free help filing their taxes. While some versions of the outreach were more effective in getting recipients to visit websites with information about the EITC, none of the “nudges” were effective in getting recipients to file a return and claim the credits.

“Previous research has suggested that low-cost “nudges” can be effective at helping people overcome barriers related to government programs and services, but that was not the case when it comes to these tax credits,” said Elizabeth Linos, a co-author of the report, public policy professor at UC Berkeley and an affiliated expert with the California Policy Lab. “One of the key differences is that claiming the credits means filing taxes, something many low-income people wouldn’t otherwise have to do. That entails significant administrative burden: compiling paperwork, finding time and help to get taxes filed, and sharing sensitive information about finances and household composition. Those challenges may be pushing away the very people these credits are supposed to help.”

Research Overview: During 2018 and 2019, the research team implemented six EITC outreach efforts via a series of randomized controlled trials (RCTs), which are the gold standard in research design. These RCTs were designed to measure the effect of different types of EITC outreach on several outcomes, including tax filing and EITC claiming. The research team reached out to several potentially eligible populations in California, including recipients of other public benefits like CalFresh, and low-income households that had not filed taxes in the previous three years. The trials were the first statewide attempt to design rigorous evaluations of outreach efforts to increase take-up of the federal EITC and CalEITC.

The California Policy Lab
The California Policy Lab creates data-driven insights for the public good. Our mission is to partner with California’s state and local governments to generate scientific evidence that solves California’s most urgent problems, including homelessness, poverty, crime, and education inequality. We facilitate close working partnerships between policymakers and researchers at the University of California to help evaluate and improve public programs through empirical research and technical assistance. For more information visit www.capolicylab.org.