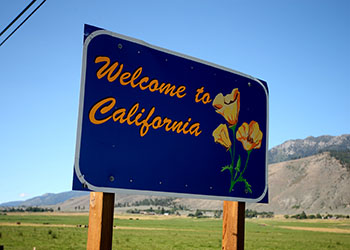 April 14th, 2022 update The research team has identified an error in how domestic entrances to California were calculated, which led to a substantial underestimate of domestic entrances in this policy brief. This error affects only entrances, and does not impact the estimates of the number of people leaving California, moving within California, or breaking down destinations among non-entrant movers. Please see the April 2022 errata for more details.

An updated version of the December 2021 policy brief, with corrected entrance estimates was released on April 14th, 2022, and is available here.

The estimates of entrances to California in the press release below are inaccurate. Please refer to the updated policy brief and errata, both of which are linked in the paragraph above.

Berkeley, CA, December 15th, 2021 — New research released today by the nonpartisan California Policy Lab finds that the number of people moving to California from other US states has dropped 38% since the start of the COVID-19 pandemic. Meanwhile, the number of Californians leaving to other states has increased by 12%, which is in-line with exit trends before the pandemic. Taken together, these two trends mean that population loss due to domestic migration has more than doubled since the beginning of the pandemic.

“The public’s attention has been focused on the so-called “CalExodus” phenomenon, but the reality is that the dramatic drop in “CalEntrances” since the pandemic began has been a bigger driver of recent population changes in the state,” explains report co-author Natalie Holmes, a Research Fellow at the California Policy Lab and a PhD student at the Goldman School of Public Policy at UC Berkeley.

“Domestic entrances are down across the state, but the Bay Area has seen the biggest drop. By the end of September 2021, there were 45% fewer people moving into the Bay Area from other US states as compared to the beginning of 2020,” adds report co-author Evan White, the Executive Director of the California Policy Lab’s UC Berkeley site. “San Francisco, San Mateo, and Santa Clara counties have all lost population to migration for the first time since at least 2016 because of these new patterns.”

Exits out of California increased during the pandemic in eight of nine economic regions, with a 21% increase in the Bay Area as compared to 1% increase in the Northern California region. The authors also found that by the end of September 2021, Californians were less likely to move than before the pandemic. However, the share of movers who left California increased from 16.3% in 2016 to 20.3% at the end of September 2021. In the first quarter of 2020, 60,000 more people left for another state than moved in and by the third quarter of 2021, that number had more than doubled, with 150,000 net exits.

Additional Background
This analysis uses the University of California Consumer Credit Panel (UC-CCP), a dataset created through a partnership between the California Policy Lab, the Student Borrower Protection Center, and the Student Loan Law Initiative. The UC-CCP consists of data from Experian, and contains longitudinal information about adults with a credit history who have lived in California since 2004. Data includes each person’s ZIP code of residence, as reported by creditors, and credit information at a quarterly frequency. We define moves as changes in ZIP codes from one quarter to the next. The analysis is focused on reported moves, defined as the date when that move is reported to financial institutions and shows up in the dataset, which we expect to lag behind actual moves. More information about methodology is included in the report.
While this data is one of the best ways to measure mobility in near-real-time, it has some limits. Because the sample consists of adults with credit histories (nearly 90 percent of adults, according to the Consumer Financial Protection Bureau), it is slightly older, more financially advantaged, and less racially and ethnically diverse than the overall adult population. As such, these results are less able to capture patterns of residential mobility among lower-income Californians and among racial and ethnic minorities. Also, because children are not included in the sample, the volume of movers are underestimates of the true volume.
###
The California Policy Lab creates data-driven insights for the public good. Our mission is to partner with California’s state and local governments to generate scientific evidence that solves California’s most urgent issues, including homelessness, poverty, criminal justice reform, and education inequality. We facilitate close working partnerships between policymakers and researchers at the University of California to help evaluate and improve public programs through empirical research and technical assistance.