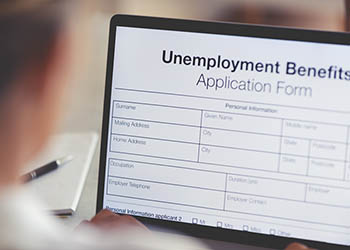 Sacramento, CA—April 12th, 2022: A new report by the nonpartisan California Policy Lab (CPL) provides six insights on equity issues in unemployment insurance (UI), and four ways to improve key UI metrics followed by policymakers and the public that have shown important flaws during the pandemic. The report is based on CPL’s research over the past two years in partnership with the California Employment Development Department.

Through this partnership, CPL produced over 20 analyses, tracking the unequal impact of the labor market crisis in near-real time while also addressing more fundamental issues with the UI system, including equity, measurement challenges, and the impact of supplemental federal programs. This new report summarizes the core findings from this research and provides policy options for improving equity and increasing the accuracy of how unemployment claims are measured. With the U.S. Department of Labor’s renewed focus on equity in the UI system, the report illustrates how valuable these data can be in helping states and the federal government assess equity in the UI system.

“States don’t typically work with researchers in the way that California partnered with CPL during this crisis and we are grateful for their partnership,” explains Till von Wachter, a UCLA economics professor, who leads this research team and who is the faculty director at the California Policy Lab’s UCLA site. “By working directly with California UI claims data for the past two years, we were able to provide state policy leaders with near real-time analysis of the crisis while also unlocking powerful insights that can inform state and national conversations and strategies for reforming the UI system.”

“California is a state where we focus on improving programs and policies, and that includes identifying where there are opportunities to improve our unemployment system,” comments Dr. Muhammad Akhtar, Chief of the Labor Market Information Division at the California Employment Development Department. “We’re grateful for the assistance of CPL’s unemployment research team in working with us and our EDD data to produce these invaluable research insights that have helped our state over the course of this pandemic.”

The first six insights of the report are focused on measuring equity in terms of access to and experiences while receiving UI benefits:

1) While nearly one in three California workers (31%) filed for unemployment during the first year of the pandemic, CPL found that female workers and workers with a high school degree or less had higher rates of claiming UI insurance than other groups.

2) The recipiency rate (a measure of how many unemployed workers are receiving UI benefits) increased during the pandemic, but CPL found that counties with higher incomes and better broadband internet access had higher recipiency rates. In contrast, counties with larger shares of Hispanic individuals, people with limited English proficiency, and more COVID-19 cases had lower rates of access.

3) The amount of the typical weekly UI benefit, when computed as a monthly benefit, is equivalent to an income that’s less than half of California’s “very low” income threshold. However, the extra $600 and $300 federal supplements changed that by substantially raising claimants’ weekly incomes and cushioning the financial shock from the extended periods of unemployment during the pandemic.

5) In California, workers with a high school degree, female workers, and Hispanic workers were the most impacted by Extended Benefits ending prematurely. In California and 39 other states, a measurement flaw means these programs “turn off” despite unemployment level remaining elevated.

The final four insights focus on ways to improve how unemployment claims are measured:

8) CPL’s alternative measure, “Entries into Paid Unemployment” also helps policymakers to better understand how many people are “churning” in and out of the UI system. In early May 2021, over 90% of people entering the UI system were reentries – people who were beginning their second (or more) period of unemployment.

9) Counting the number of “continued claims certified” each week can provide a distorted view of the number of people receiving UI benefits, due to people retroactively claiming benefits for past unemployment and due to delays in state agencies certifying benefits. CPL’s alternative metric measures the number of claims based on when the unemployment was actually experienced, proving a more accurate and timely labor market measure.

10) Partial and denied UI payments are an often-overlooked measure of unemployment, but they can show how many workers are still connected to their employers. During the pandemic, the share of UI claimants who received partial payments hovered between 9-11%, while the share of workers denied payments was between 5 to 6%. Older workers, more educated workers, and White workers were more likely to receive partial UI payments and to be denied UI payments due to excessive earnings.