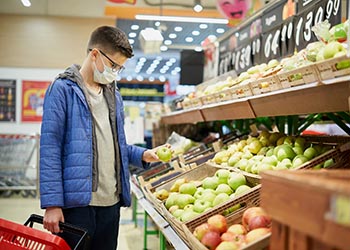 Berkeley, February 23rd — The CalFresh program, also known as SNAP or food stamps, can help college students make ends meet while attending school, but it’s been unclear how many students are accessing and benefiting from this program because of data limitations. To address this need, the nonpartisan California Policy Lab (CPL) is partnering with California’s higher education and safety-net systems to build a linked database to bring together data about college enrollment, financial aid, and CalFresh participation.

As part of the Student Supports Project, CPL released a new data point today that provides original estimates of the number of University of California (UC) and California Community College (CCC) students who were enrolled in CalFresh during the 2019-20 Academic Year. The data point reports CalFresh participation rates among student demographic groups, campuses, community college regions, and financial aid status.

“CalFresh benefits can be a big help to students struggling to cover basic living expenses while in school, but only if students are able to access benefits,” explains co-author Jesse Rothstein, Chancellor’s Professor of Public Policy and Economics at UC Berkeley and the faculty director of the California Policy Lab’s UC Berkeley site. “Until now, we haven’t known how many students were receiving benefits, nor how many were eligible but not participating. This partnership will pay big dividends for California students as we work with our state partners to identify participation trends and to evaluate strategies to make CalFresh more accessible.”

“Our students shouldn’t have to worry about whether or not they can afford their next meal,” explains Genie Kim Director of Student Mental Health and Well-being at the UC Office of the President. “That’s why we’re excited about this work and about improving access for students across the state.”

“California’s high cost of living impacts everyone, including students who often have very limited resources,” adds Shawn Brick, Executive Director for Student Financial Support at the UC Office of the President. “This DataPoint is the first step in understanding how many students are benefiting from CalFresh and we’re excited about the next phase which will show how many eligible students are using this program, how many are not, and what more we can do to help them access these critical resources.”

“Many low-income and California community college students could benefit from more supports like CalFresh while they’re in school,” comments Valerie Lundy-Wagner, Vice Chancellor of Digital Innovation and Infrastructure at the California Community Colleges Chancellor’s Office, who oversees the system’s research agenda. “This research partnership will help build the evidence-base for strategies to make that happen.”

• Among California community college regions, CalFresh enrollment was highest in the Central Valley (17.0% of all enrolled students), followed by the Inland Empire (12.7%) and Northern California (12.4%). These three regions are (in this order) the highest poverty regions in CA.

• UC San Francisco (UCSF) – which enrolls only graduate students – had the highest rate of student CalFresh enrollment of the UC campuses, at 32.9%.

• UC Merced and UC Santa Barbara had the highest rates of CalFresh enrollment among undergraduates, at 21.5% and 21.0%, respectively.

• CalFresh enrollment varies considerably across age groups within the CCC student population, which includes many non-traditional and returning students. Participation rates are highest among 30 to 39-year-olds, and lowest among students in their early 20s.

Additional background
The California Policy Lab (CPL) is partnering with the California Community College system (CCC), the University of California Office of the President (UCOP), the California Department of Social Services (CDSS), and the California Student Aid Commission (CSAC) to build and analyze a linked database of student-level administrative data on college enrollment, financial aid, and CalFresh participation. This data point provides student enrollment rates in CalFresh, but it does not estimate how many students are eligible for the program. Eligibility is based on multiple factors including income, household composition, school enrollment status, and financial aid status. For more information about eligibility rules for students, please see the full-page diagram on page 7 of CPL’s recent publication: Addressing the barriers college students face when accessing CalFresh food benefits. Future research from CPL will use the new linked dataset to measure eligibility rates and show how many likely eligible college students are participating in CalFresh.